The combined VDI/TK team.... Tom Crowe, Jeffrey Hesler and his sister Tracy Lind plus the TK contingent of Lucy and Richard Wylde, and Lucy's brother William Wilcock travelled up to the Washington State's northern Cascades to climb, Mt. Baker, a still active stratovolcano that lies close to the Canadian border.

After collecting our excellent guides Kevin and Karl from the American Alpine Institute in Bellingham we ventured inland to the trailhead at 3700 ft (1100 M). The trek in along the Heliotrope Ridge involved some precarious log crossing of glacier-melt streams. 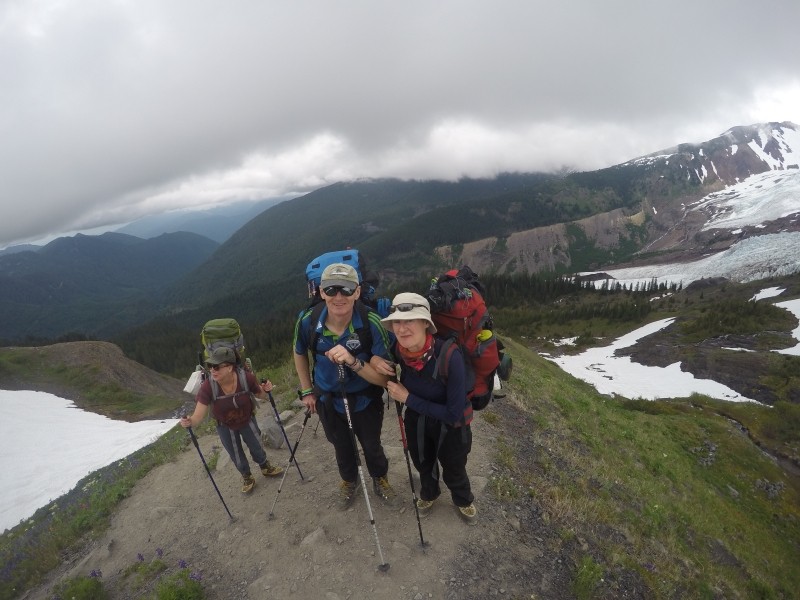 Tracy, William and Lucy at the end of the long climb in... still smiling

Mid-afternoon on the first day has us putting up tents at the Hogsback Camp, just below the snow line at 5900 ft (1800 M). 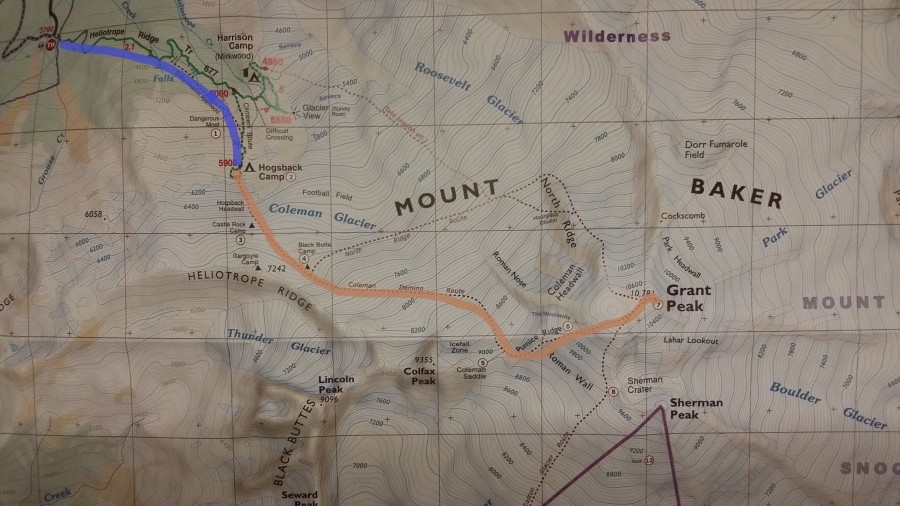 The second day was spent practising crampon and rope skills to safely traverse the highly crevassed Coleman glacier (lots of prusiks for self-rescue). After some evening rest we departed at 0.30am in two rope teams with the stars and our headlamps illuminating the path ahead.

It was a beautifully clear and balmy night: Arising an ahour and a half after we set off,  the nearly full moon made the icefield and seriously big crevasses very apparent. By about 4 am we moved off ice and onto the Pumice Ridge - Mt. Baker is geologically very young, so there is a lot of pumice stone about. An hour later had us attacking the Roman Wall, a 300 metre 35 degree slope which kept our heart rates up. 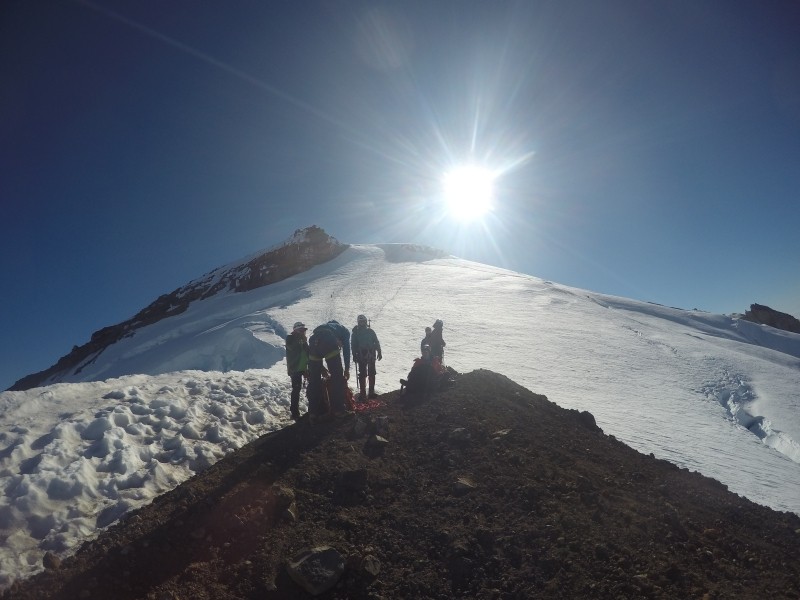 A view from Pumice Ridge looking up the Roman Wall

A little less than seven hours of steady climbing brought us to Mt. Baker's gentle summit at 10,781 ft (3286 M)  ...above the fumaroles spouting sulphurous fumes in the Sherman Crater beneath us, and with a 360 degree view which gave the feeling of being on the top of the world. 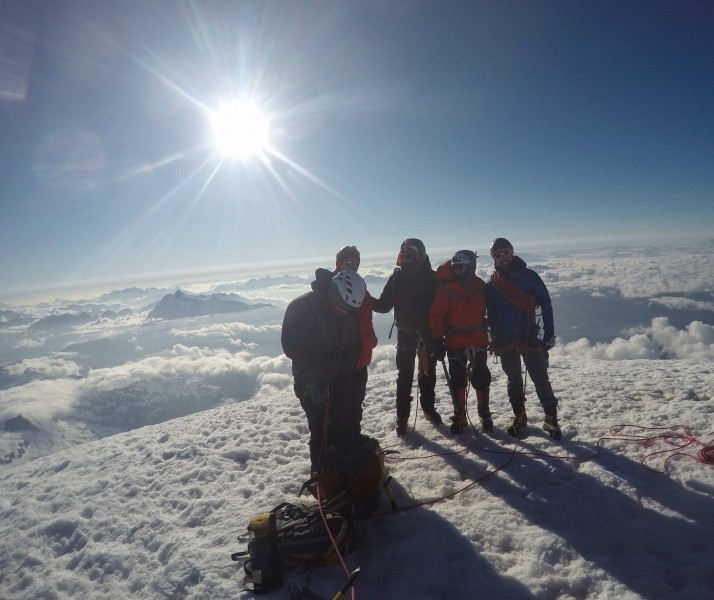 Lucy, William, Tracy, Jeffrey and our guide Karl... looking south-east with the Cascades below 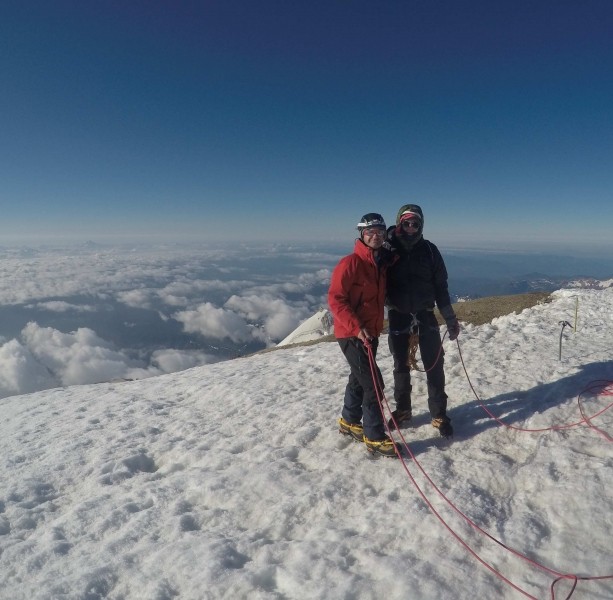 Richard and Jeffrey at the summit.... still well tied in

Then the tough work began, as our knees were pounded and our legs turned to jelly by the steep descent. By now the July sun had softened the snow, and footwork became harder. On other mountains, glissading down (a technical term for going down on your bottom) is possible... but Mt. Baker does not want to have its dignity trampled upon... and prevents this through the multiple moats and  crevasses in its glaciated slopes which would provide a trap for the fast moving. 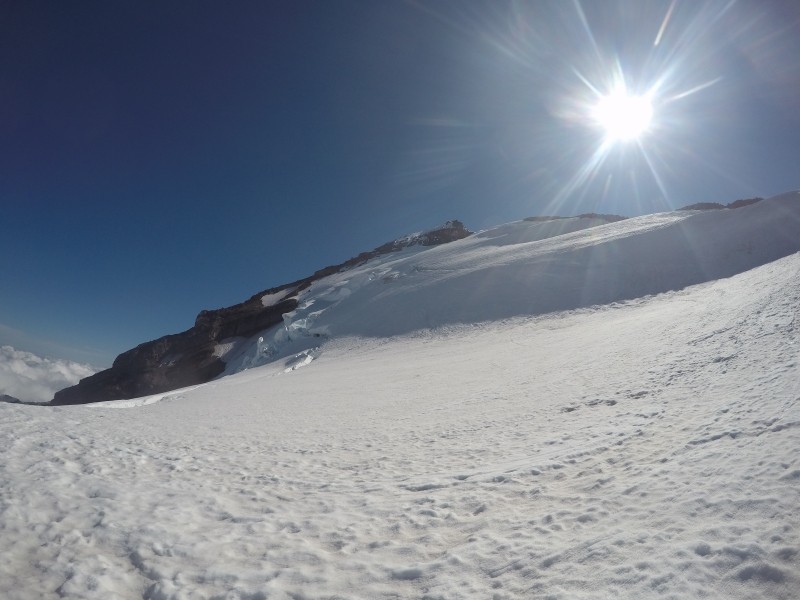 A view of the now softening snow below the Pumice Ridge... with a significant crevass on the top left

We returned to base camp around noon, packed up and - now laden with tents, cookers and all of our rubbish (as in UK politics,  BREXIT means BREXIT:  in this case all means absolutely all) we trudged down to our cars.... passing the time with the odd conversation about matters millimetric...and from there back to William's home in Seattle for a most welcome dinner.

A sub-four minute video of the trip is available here

By accepting you will be accessing a service provided by a third-party external to http://josephson.terahertz.co.uk/